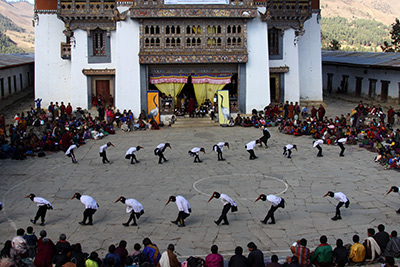 As the community of Phobjikha valley sheltered themselves in the confines of their warm houses escaping the cold morning and windy afternoon, the majestic Black-necked Cranes punctuated the frost laden wetlands of Phobjikha valley looking for cozy place to feed and play around. The arrival and departure of the cranes is very much the part and parcel of the lives of the locals.

The local conservation group called the Phobjikha Environment Management Committee (PEMC)  has successfully organized the 14th Annual Black-necked Crane Festival. This year the festival was celebrated, in the court yard of the famous Gangtey Goemnpa, once again on 11th November 2012 coinciding with the birth anniversary of His Majesty the Fourth Druk Gyalpo Jigme Singye Wangchuk. The festival marks the arrival of the cranes in the valley and also as one of the National print media, Kuensel, put it the festival is a “welcome party” for the cranes. The festival attracted more than 400 international tourists. The locals gathered in hundreds in their best attire with their family members. The festival was organized first in 1998 by RSPN to remind the local people about the importance of the conservation of the cranes and its habitats and also to generate some income to finance local conservation initiatives. Now the festival is organized by PEMC.

The festival was graced by the Khenpo of the Kunzachholing Thorim Shedra as the chief guest. During his speech he addressed the importance of the environment conservation linking it with Buddhism. He also mentioned about the prominence of the Black-necked Cranes in traditional paintings, folklores and songs. The chairperson of the committee also stressed on the reason for having introduced the entry fee to support the sustenance of the festival.

Annually the festival is organized by PEMC, a local community group composed of elected leaders and development sector representatives in the valley. This year the PEMC introduced an entry fee of Nu. 500.00 for every tourists to help sustain the fund for the annual festivals. The fund will also be utilized by the committee to provide better services for the visitors who support festival and to improve the festival programmes.

The local communities, the monastic institution and the schools collaborate to present a variety of cultural performances including traditional masked and folk dances. The limelight of the festival was the locally choreographed crane dance performed by the local school children with grace and beauty.