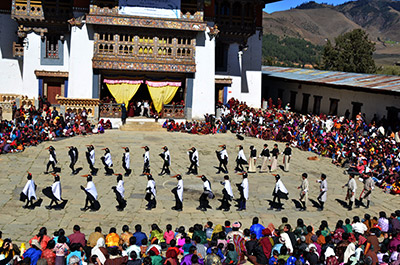 The 15th Annual Black-necked Crane festival was celebrated in the courtyard of the magnificent Gangtey Gonpa, in Phobjikha on 11thNovember 2013 coinciding with the 56th Birth Anniversary of His majesty the Fourth King of Bhutan.

The festival began with the singing of national anthem, offering our respect to the great kings of Bhutan. The theme for the festival was “Living with the Cranes”, which aptly describes the way local people live in the valley in close harmony with the elegant Black-necked Cranes. Unlike past festivals which didn’t have specific themes, this time the theme was attached to the festival in order to create awareness among the locals and international tourists.

The Black-necked Crane festival was first initiated with the objective of linking conservation of the graceful birds to the improvement of livelihood of the community. Over the years, as the festival gained popularity among the community people, visitors from the nearby Dzongkhags and international visitors, it turned out to be an annual event to welcome the cranes and to celebrate the centuries’ old relationship between the cranes and people of Phobjikha. Among the audience, one of most popular dances is the Black-necked Crane dance by the school children in crane costumes. The local community also takes part in the festival by performing folk dances and mask dances.

Dr. George Archibald, Co-founder of International Crane Foundation, USA, graced the festival as the guest of honor. Dr. George’s association with the cranes and the cranes of Bhutan dates as early as the 1990s. Dr. George assisted the Royal Society for Protection of Nature (RSPN) crane banding and color tagging the Black-necked Crane of Bomdeling and Phobjikha in the past. The research studied the migratory movements of the Black-necked Cranes coming to Bhutan. In his speech during the festival, he mentioned that Bhutan’s wetland such as Bomdeling, Phobjikha and Khotokha are important habitats for the cranes and it must be preserved for our future generations. He added that because of his love for the Black-necked Cranes and the country this is his 28th visit to the country.   It was thanks to Dr. Archibald for being one of the influential people who helped RSPN in initiating the first Crane festival.

The day is also celebrated throughout the country as the Children’s day. To engage the children of Phobjikha valley in the festival an art competition was organized among the three Schools of the valley (Phobjikha Middle Secondary School, Bayta Community Primary School and Rameychen Community Primary School). Five best arts from each School were displayed during the festival to be assessed by the four chosen guests including the guest of honor. The art was based on this year’s theme ‘Living with the Cranes’. Cash prizes and certificates were awarded to the winners.

The festival organizers from PEMC said that it is a challenge to organize the festival mainly because of resource constraints in terms of finance, management and services. While the preparations are modest tour operators and tourists expect a lot.  In order to sustain the festival PEMC, starting 2012 Black-necked Crane festival, instituted an entrance fee mechanism, where by international tourists were charged Nu. 500 as entrance fees (Nu. 250 for SAARC citizens). This has received mixed reactions from tour operators, guides and the tourists. However most tourists, guides and the tour operators have applauded the mechanism since the fee ploughed back to Crane festival and conservation initiatives in the valley.

More than a thousand people including over 300 foreign visitors witnessed the festival this year.