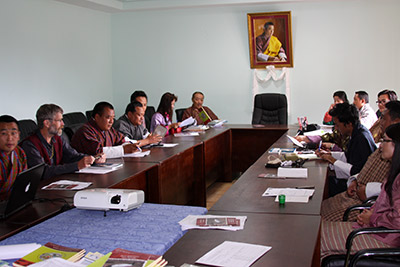 Understanding status and conserving their habitats.

The workshop aimed at bringing people and institutions working on Black-necked Crane (BNC) at one platform and share information on the status of BNC in their respective areas, developing a common monitoring protocol for the BNC to generate uniform data and information on BNC in the country, dissemination of information on the status and conservation prospects of the BNC in Bhutan and outside world and exploring  the opportunities of further collaborative program to protect and save the species.

The workshop was collaboratively organized by WWF Bhutan Program and RSPN

The idea of organizing Annual BNC coordination workshop emanates from the very fact that BNC (Grus nigricollis) is a rare species and endemic to the Himalayan region. The most recent and reliable estimated global population of the BNC is about 11,000 individuals, of which close to 500 cranes visit Bhutan each winter spread across various places. Soothingly the BNC sightings in Bhutan has increased by 20 percent in the last 26 years.

It holds vulnerable status under  International Union for Conservation of Nature (IUCN) and is listed in Appendix I of Convention on International Trade in Endangered Species of Wild Fauna and Flora (CITES). The IUCN vulnerable status pertains to those taxa that are facing a higher risk of global extinction (IUCN,2004) and CITES Appendix I pertains to taxa that are threatened with extinction and the trade in specimens of these species is permitted only in exceptional circumstances (CITES,2005).

In terms of its conservation status in Bhutan, BNcs are listed under Schedule I, totally protected under the Forest and Nature Conservation Act of Bhutan, 1995, Volume I. Apart from its ecological significance it holds aesthetic, social, spiritual and cultural values in all the countries where BNCs are found. In Bhutan, it also holds economic value especially in the case of Phobjikha where a large no. of tourist visits the valley to see the cranes and the wetlands.

Globally there are concerns regarding the deteriorating habitats of the BNCs both in breeding and non breeding areas. In BNCs habitats within Bhutan too the habitats are facing anthropogenic pressure in terms of agricultural expansion, settlements and infrastructure development. There is a weak coordination among the stakeholders. Knowledge gaps among the stakeholders on the presence and habitat quality of the species in different parts of the country remains as one of the major challenges. Addressing this gap will provide the status of cranes in the country and the threat they face, so that this will allow stakeholders within their capacity to design programs to protect the species. Also, the status of cranes in Bhutan can be disseminated outside Bhutan where it would be possible to motivate crane enthusiasts and donor organizations to support the conservation of cranes in Bhutan.

Within the framework of 5 year cycle strategic plan document of RSPN (strategic plan document for 2011 to 2015), under the conservation of threatened species, RSPN aspire to ensure that annual winter population of BNCs does not decline below 300 for Phobjikha and 500 for Bhutan through; protection of BNC habitats especially wetlands, monitoring winter populations and conduct annual counts and by fostering trans-boundary research.