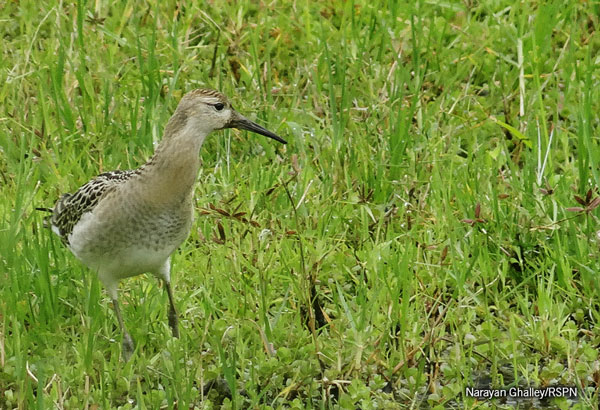 The preliminary checklist on birds of Buli was conducted from 6th to 9th of October 2015 as a part of the Biodiversity assessment of Buli Wetland, funded by GEF Small Grants Programme, UNDP, Bhutan. A total of 71 species of birds were recorded in Buli and a lot more is expected to add to the list if observations are made throughout the year.

It is interesting to note that Buli has a very rich biodiversity of birds, from the most common birds like sparrows and bulbuls to the less noticed Hornbills.

Sharp-tailed Sand piper (Calidris acuminate)was recorded during the assessment of Buli wetland. It was confirmed by Sherub, an ornithologist with Ugyen Wangchuck Institute for Conservation and Environment (UWICE), that it is a new record to list of birds of Bhutan.

The Sharp-tailed Sandpiper is only recorded in the Birds of Indian Sub-continent until now. It was observed in the wetland near the Buli village. It may be a winter visitor or a vagrant according the ornithologist.

The breeding adults have rich brown colour with darker feather centres above, and white underneath apart from a buff breast with a light superciliary line above the eye and a chestnut crown.

During the winter, Sharp-tailed Sandpipers have grey plummage while the juveniles are brightly patterned above with rufous colouration and white mantle stripes.

The ornithologist said that huge altitudinal ranges that rises from tropical forests in the south to the alpine region in the north is one reason why Bhutan is home to a huge collection of flora and fauna which is supplemented by strong political will as well as conservation investment, such that Bhutan has conservationists spread all across.

While such new records are encouraging for the biodiversity of the country, RSPN feels that constant studies and assessment are required.