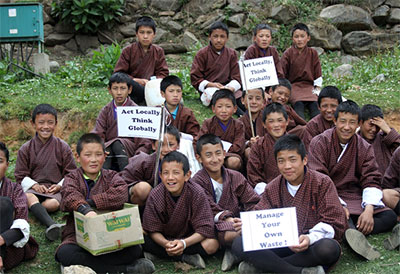 On 5th June, while the Thimphu citizens were walking to their work places observing the World Environment Day, a group of students of Phobjikha Middle Secondary School were busy cleaning up the settlement areas in Phobjikha Valley. These group of students were the school’s Tarayana and Nature Club members.

The students coordinated by the Club’s Coordinators started early at 9 am collecting the littered plastics, wrappers, papers etc. from various settlement areas and along the Gangtey to Phobji road. Their motto was clearly reflected on the placard they carried. It read: Act Locally, Think Globally. Though the cleaning campaign was a small scale initiative, it was aimed at raising awareness among the local community about waste management and waste segregation.

Phobjikha also boasts of a Waste Management System that was put in place in August 2011 funded by JICA.

The Clean-up campaign was initiated by the Club Coordinators of Phobjikha Middle Secondary School and supported by RSPN as one of the activities to commemorate RSPN’s 25th Anniversary.