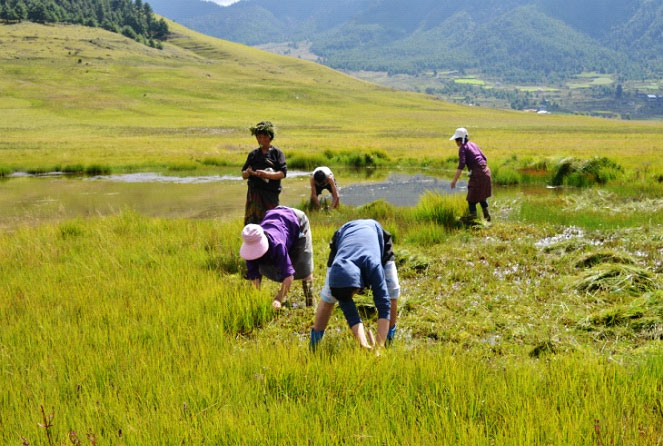 Every living being instinctively develops a defense mechanism to prevent themselves from the predators.

Cranes in general prefer shallow water bodies for roosting. Movements on the surface of the water by the predators and other animals alarm the cranes and they fly away.

In Phobjikha, Black-necked Crane roosts are maintained and restored annually by the Royal Society for Protection of Nature around mid September, just before they start arriving in the valley. Observations have shown that the cranes prefer the artificial roosts over the natural ponds in Phobjikha.

The restoration work involves uprooting of grasses, pooling water and clearing. Streams flowing into the wetland are diverted to the cleared spots to create shallow ponds. Around two to three such ponds are maintained annually. A total of seven roosts, including the three artificial roosts are currently being used by the cranes.

During the winter of 2010-2011, a new roost measuring 50×50 meters was developed. The depth of the pond was about half a meter and located at the base of the hill where the old Crane observation blind stands. It was set up to accommodate all the cranes in one common place to roost in.

That winter over 150 cranes used the roost. However, the following winter only a few cranes roosted there. Footage from the camera traps set up along the roost showed that the predators like Red Foxes and Common Leopards frequented the roost more than the other roosts. The proximity of the roost to the dry land could have made the predators easier to predate on the cranes using the roost.

The Roost 1, which is located some 100m South from the new roost was restored and expanded this year as a part of the annual roost maintenance program. Some 50 to 60 cranes use the roost each winter. Because of the gradient of the landscape, and also to increase water retention, six terraces were made ranging from 30X30m to 70X40m in area. The total area of the roost is now 100X100m, over four times more than the previous area, and depth measuring up to 1.5 ft. As evident from the images below, the whole area is now flooded with water.

The restoration work was outsourced to the local community. The involvement of local people was to mainly create awareness about the preservation of the wetland as a very important habitat for the Black-necked Cranes.