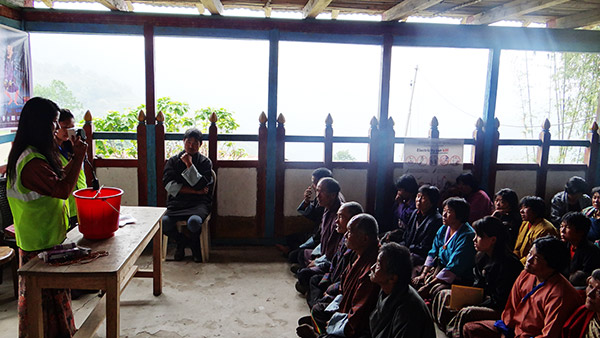 Rural Electrification in the Blocks of Zhemgang District is 90 percent complete, and stringing of power-cable lines and construction of power sub-stations for rest 10 percent are currently under progress.

Electrification eases hardships people face while using other forms of energy. People have to now collect firewoods from faraway places. Getting kerosene and LPG gas during summer is not so feasible with constant road blocks to the market.

Majority of the electrified households said that their household expenditure on energy has decreased due to electricity. Since the electricity is new in the district, people are less aware on the concept of safe and efficient use of both grid-electricity and Solar Home Lighting System.

The objectives of the awareness programme and campaign is to generate awareness on efficient and safety use of electricity through gender sensitive user-education programme for 4500 men and women user in all eight Gewogs (blocks) of Zhemgang.

It was conducted in seven Gewogs starting from 7th of May till 10th of June, 2014 in various locations. It included class-room lectures, display banners and distribution of posters, showing of videos on the safety and efficient use of electricity, and practical demonstration of electrical appliances, etc. It was created for rural communities, the shopkeepers, monks and school children in seven Gewogs of Zhemgang district, and the awareness has raise to 4857 users. The list of user attended the campaign are as below:

Around 4857 users were made aware on usage of the electricity and the risks involved. It was 357 users more than our set target, despite many challenges in terms of transportation and public participation. The number could have been more if Bardo and Shingkhar Gewogs (blocks) have been fully electrified. The team could not raise awareness programme in these two Gewogs except Nimshong Tsogwog (sub-block) under Shingkhar Gewog.

The users who participated in the awareness programme were of view that the programme has immensely benefited in handling the electrical appliances. More importantl,y they knew the safety and efficient use of electricity in their day to day lives. The team was also informed that they never received such comprehensive awareness programme before and they would not expect the same in future too.

RSPN would like to thank all stakeholders who were involved in the program. The project is funded by Asian Development Bank.

Awareness campaign with the community

RSPN team during the program kick-off.