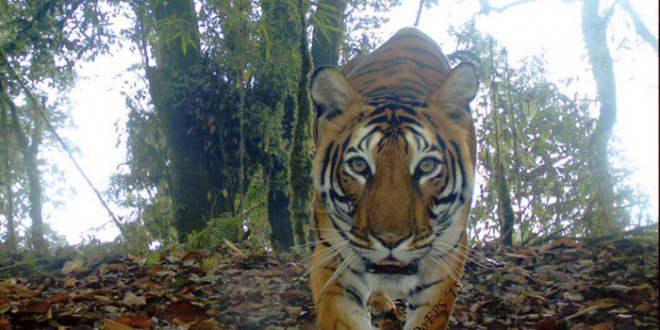 Report: Bhutan has 103 tigers roaming in the wild, the National Tiger Survey report that was launched yesterday found.

The figure is a significant rise from the previous estimate of about 75 tigers in 1998.

The big cat population was analysed from 1,784 tiger images and 138 videos captured in 1,129 cameras stationed across the country between March 2014 and March 2015.

According to the report, tigers were mostly distributed within the northwestern, central and south-central parts of the country. It was found between the ranges of 150 to 4,000 meters.  Four tigers were also recorded in the East.

Distribution pattern observed from the current survey slightly differed from the 1996-1998 survey. The previous survey did not show distribution in the northwestern part, especially Paro and Gedu division.

While the density estimate of an overall survey is low, areas like Royal Manas Park, Jigme Singye Wangchuck National Park and Zhemgang division has higher densities between two to three tigers per 100km.

The presence of tiger outside the protected areas, called as division, was found high with the highest concentration in Zhemgang at 17 adults and three cubs. Paro division recorded six adults and five cubs, while two adults and two cubs were recorded in Thimphu division.

Wangudephodrang recorded five adults while another two adults were found in Bumthang division.  One each was recorded in Tsirang, Gedu and Samdrupjongkhar divisions.

Lyonchoen Tshering Tobgay said the survey report is a gift to His Majesty The Fourth Druk Gyalpo on his 60th birth anniversary.  He said that the tiger population finding is news of pride, which has increased by almost 39 percent in the last 17 years.

He, however said, “If we go by the elevation of presence of tigers, tiger species found in Bhutan could be different from those found elsewhere in the world,” he said adding that Wildlife Conservation Division needed to confirm this.

Along with the National Tiger Survey report, lyonchoen also launched the Bhutan Forest and Wildlife Enforcement database ‘BhuFED’ yesterday.Chief forest officer of the wildlife conservation division, Sonam Wangchuk said BhuFED is an online application system of reporting on illegal wildlife trade occurring within the country. It can be accessed by anyone from different parts of the country but with a secured code.

Although there are no scientific studies to prove, he said, many people are using these National parks for illegal activities such as poaching. The online application was developed to counter such challenges.

Accessibility to an online reporting system requires urgent need for smart patrolling, handing over of individual tigers to the respective field divisions, corridor management, zoning of suitable tiger habitats and emphasise on conservation outside the protected area, Sonam Wangchuk said.

The most numerous of all tiger subspecies, Bengal Tigers, with less than 2,500 left in the wild, are found in Bangladesh, Nepal, Bhutan, China and Myanmar.

According to the survey report, the frequency of images captured indicated that tigers in Bhutan were mostly active in the morning and evening. Minimum activity pattern was recorded between 1-2am and 1-3pm.

“Tigers seem to be localised to certain areas in the country,” the report states. For instance, none of the tigers of the northern block- Jigme Dorji Wangchuck National Park, Paro, Thimphu, Bumthang, Zhemgang divisions and WCNP were sighted in the regions of southern block and visa versa.

For the national tiger survey, 448 camera traps were stationed in the southern block and 681 cameras in the northern block. The survey spotted five breeding sites.

Meanwhile the tiger survey was carried out with a budget of Nu 30.882M from the World Bank as the IDA credit adaptable phase 2, Nu 6.25M from WWF Bhutan. Bhutan Foundation provided 200 cameras for the survey.

Number of tigers increases in Bhutan

Nationwide tiger survey in the country, conducted entirely by a team of Bhutanese nationals, found an increase in the number of tigers in the country. From the previous estimated 75, the number has risen to 103.

“Tigers are considered very precious in our country,” said the Prime Minister, Tshering Tobgay. He said the existence of such a good number is a sign of good ecosystem.

The Department of Forest and Park Services of the Ministry of Agriculture and Forest carried out the nationwide re-validation survey of tigers from March 2014 to March 2015. Camera traps were set up in 1,129 grids.

Bhutan is one of the 13 countries in the world where tigers still roam in the forest.