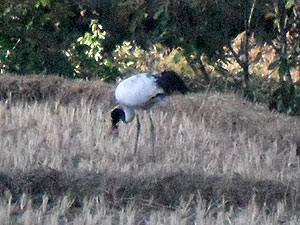 15 December 2011 –  Mr, Tseten Dorji, the field officer of RSPN based in Kangpara, Trashigang received reports of sighting of lone black-necked crane in Kangpara. Mr. Phurpa Dorji, Assistant Forest Officer of Kangpara Geog Territorial Forest Office informed the field office that he first sighted the crane feeding on post-harvest paddy fields below Kangpara Lower Secondary School at around 7:00AM (BST) this morning. He said that the black-necked crane looked like fully grown adult.

According to Kangpara Gup Chempa Dorji, he says this is the first time he is sighting black-necked crane in Kangpara. He doubts that the crane must have lost its way while flying to their popular winter habitats such as Bumdeling in Trashi Yangtse.

Until today, there are no records of cranes sighted in Kangpara, Trashigang.

The RSPN field office in Kangpara have contacted the extension and local government officials in Kangpara to closely monitor the crane and disallow people to disturb the crane.

We would also like to thank all the crane enthusiast for informing RSPN for Black-necked Crane spotting in various parts of Bhutan.

Lately, RSPN received several confirmed reports from credible sources of sighting black-necked cranes in unusual places like Kabisa and Ramtokto in Thimphu, Chuzergang in Gelephu, and Kichu in Paro. While the major rossting palce is Phobjikha in Wangdi Phodrang and Bumdeling in Trashi Yangtse, the cranes have been spotted in new places throughout Bhutan. RSPN have no record of such unusual sigtings and feels that it is important to study why cranes are in those new places.