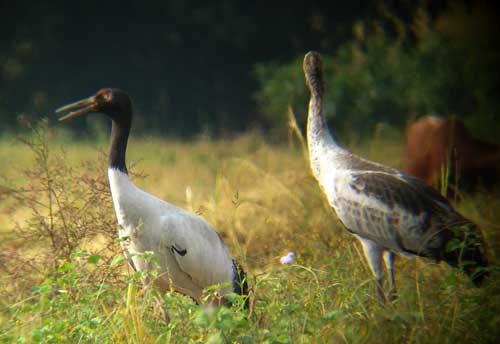 For the first time in the known history of RSPN, a family of Black-necked cranes, (2 adults and 2 juveniles) have been sighted in Gelephu, Sarpang Dzongkhag (district).

On 22nd of November 2010, RSPN head office in Thimphu was informed by Gelephu Dungkhag officials about the spotting of BNC in Karbithang village under Gelephu Dungkhag (sub-district), Sarpang Dzongkhag.

The RSPN representative arrived to verify the reports in Gelephu on 28th November. Mr. Tshewang Norbu, Asstt. Researcher with the RSPN along with B. R Gurung, Agriculture Support Sector project, Department of Agriculture, MoA and Mr. Sangay Tshering, Gup, Chuzegang Geog jointly visited to the area where the cranes were reportedly found.

The team found the cranes foraging and gleaning in the paddy fields of Dawathang and Karbithang (N.26.87147, E 090.51690) village at 265msal. The BNCs were feeding in the harvested paddy fields.

The Gup said that the cranes were first spotted on 14th November in Karbithang village which is about 200 meters away from Mau Khola river. The Gup reported that they have never seen BNCs in the area before.

RSPN has been involved in monitoring and research of cranes since 1986 and it is first time that the cranes are spotted at such a low altitude. In fact, cranes have been never spotted in any of the southern Dzongkhags until today.

Awareness amongst the immediate local communities is deemed necessary and urgent as they may disturb the cranes, which have visited the area for the first time..
RSPN would like to thank all the persons and institutions who were concerned and reported about BNC’s presence in Gelephu. We really appreciate your concern and support in conserving the country’s biodiversity.

The cause for the cranes migrating to the record-level low altitude is still unknown.