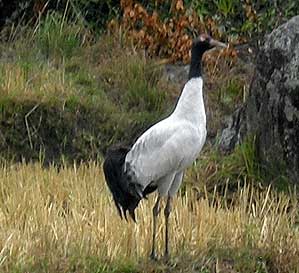 The melodious calls of the black-necked cranes are unique and carry strong message of their presence in the wetlands of Opkina, Minjay Gewog under Lhuentse Dzongkhag. The wetlands now abandoned after the paddy harvests provide perfect roosting place at night and plenty to pick during the day for the birds.

For the communities, it is nothing unusual to hear such calls around this time of the year.  They are their esteemed guests – the graceful black-necked cranes (Grus nigricollis) in the brink of the extinction visiting the valley every winter. People claim that the cranes have been wintering to these places for many decades. However, of late the visits have become irregular.

Local people belief that cranes landing on their fields promises bountiful harvest in the following year. While the truth is yet to be proved, such belief brings harmony and peaceful co-existence among the local communities and the cranes.

On the contrary, incidences of children hunting the birds with bows and arrows are also being shared among the communities. This can be attributed to the low literacy of the people on significance of the birds in an environmental arena. This is where the governmental departments, NGOs and individual conservationist should come into play. To maintain the current trend of annual migrations, communities require advocacy, education and awareness about the cranes. Otherwise, in years to come, threatened by the nature of the people, they will stop the migration and choose to die elsewhere.

Till early December 2010, there were five individuals recorded. With at least 591.42 acres of wetlands cultivated in Menbi and another 401.71 acres of wetlands cultivated in Minjay Gewogs, Lhuentse Dzongkhag has potential to become potential alternative roosting place and the birds need support from the communities. Although two cranes were first seen on 20 November 2010, unconfirmed reports say that the cranes were in the area couple of days before actual photo-capture.