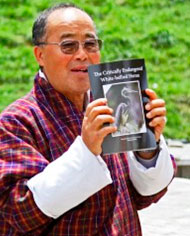 Dasho Sangay Thinley officially launched the book29 July 2011, Thimphu: RSPN’s Chairman, Dasho Sangay Thinley (Rtd.) officially launched the book titled “The Critically Endangered White-Bellied Heron” on the occasion of the Global Tiger Day organised jointly by Wildlife Conservation Division and WWF Bhutan program office.  The book is a result of initiative taken by RSPN and the Research Team of RSPN. The book provides an overview of the white-bellied heron population, distribution and status in the country.

It also provides RSPN’s research activities in the field of heron conservation.  This book, apart from the information, provides some of the rare pictures of WBHs taken in the Phochu area in Punakha.

There are about 26 individual white-bellied herons in Bhutan of the total estimated of 200 numbers in the world. Like any other species, its conservation are increasingly becoming a challenge due to socio-economic development and anthropogenic threats that looms round the clock. In the case of white-bellied herons in the Punatsangchu  River Basin, hydro power projects been a major concern and challenge for its habitat conservation and preservation.

The book is the first of its kind which entirely provides information on the particular heron species in Bhutan and in the world. It is aimed at educating the general mass both within and outside the country. More importantly it is intended to reach the politicians, and the policy and the decision makers. Their political will and support are crucial to the very survival of this critically endangered species endemic to the eastern Himalayas.

RSPN having been involved in the White-bellied Heron conservation project since 2003. Over the years Felburn Foundation via International Crane Foundation (ICF), San Diego Zoo via ICF (USA),  WWF Bhutan Program, and Punatshangchu Hydro Project Authority have been supporting in the study and habitat conservation in the Punatsangchu River Basin.

After the launch of the Book, RSPN distributed copies of the book and book marks with caption: “Save the White Bellied Heron” to the guest gathered.