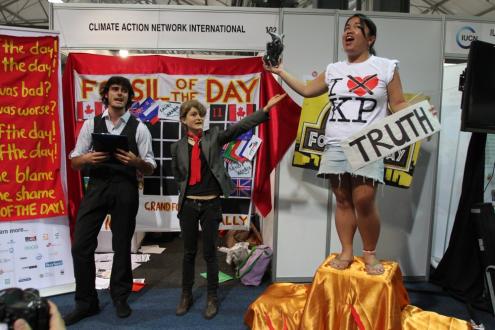 6 December 2011 – Durban, South Africa – Canada wins a first place Fossil of the Day Award. Canada’s position has been clear when it comes to Kyoto – without movement from large industrializing emitters, Canada will not budge. Over the weekend you may say that China called this bluff by announcing openness to a more flexible position at the climate talks. Unfortunately, it seems Canada is not prepared to live up to its end of the bargain – with the Minister saying that even if China moves, Canada’s position is set in stone.

In addition to having this fossilized position – Canada’s minister also seems a bit confused in his messaging, saying that all major emitters have to be on board in order to, “prevent global warming hitting or exceeding two per cent.” Two per cent? Two degrees? Facts don’t seem to matter when your mandate is to protect polluters and not people.

Perhaps the Minister has confused two degrees with two percent because one of this government’s top lines to avoid action is to say they are only responsible for two per cent of global emissions. Important to note is that Canada is in the top ten global emitters no matter how you cut it: per capita, absolute and historically

Climate Action Network’s 700+ member organisations regularly judge ‘Fossil of The Day’ awards, giving them to countries who have performed badly in the climate change negotiations. When earned, these slightly sarcastic yet highly prestigious awards are presented daily during climate talks. The Fossil of the Day awards were first presented at the climate talks in 1999 in Bonn, initiated by the German NGO Forum