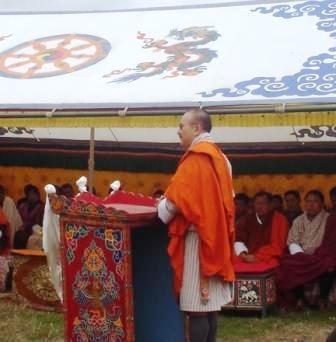 When the rest of Thimphu routinely trudged on to work with their lives at houses and offices, a small group of about 100 people gathered 1000 meters above Thimphu valley at Kuensel Phodrang to receive the Guest of Honour, His Excellency Lyonpo Sangay Ngedup to celebrate a special day in the lives of these people, the “World Environment Day”.

The day commenced with the traditional offering of marchang ceremony at the plantation site for the success of an auspicious day. It was commemorated with the inauguration of the site for plantation of tree saplings to mark the “Billion Tree Campaign and Green South Asia 2007”. The deforested site of 15 acres above Thimphu at an altitude of 2500 m, Kuensel Phodrang, was identified by the Department of Forest and the National Environment Commission for reforestation.

His Excellency Lyonpo Sangay Ngedup, the guest of honour, said that we can pass strong message to other developed and powerful nations of their responsibility in reducing carbon emissions in the atmosphere while we are doing our part.  He said the theme “Melting Ice- a Hop Topic?” demands people to take responsibility and aim towards enhanced and recovered atmosphere of our earth. Congratulating all stakeholders who have put in their efforts in organizing the session, he urged the people to enjoy planting more trees as tree is life and life without trees would be non-existent. According to the Buddhist philosophy all living beings are dependent on each other; similarly, we all are dependent on natural resources, he said.

Dasho Nado Rinchen, the Deputy Minister of National Environment Commission said that although the arctic and polar regions, which are related to the theme of the day, are far from us, we can observe the day in our own way to contribute for the global cause of reducing carbon dioxide.  He said that the increasing global emissions affects in every way of life of living beings on earth.The representatives from UN system in Bhutan, Ministry of Agriculture, National Environment Commission, City Corporation, WWF, Bhutan Trust Fund for Environment Conservation and Royal Society for Protection of Nature participated in the day-long plantation.

Informally, its is expected to contribute to the nation’s efforts in maintaining 60 per cent targeted of forest cover for all times to come. It is felt that the more volunteers should come forward for maintaining and nurturing the saplings planted at the site.