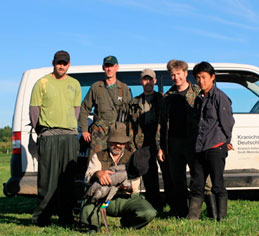 The team with the 36th CraneCranes have been fascinating man since time immemorial not only for its elegance and beauty but also for its agile dancing, flight formations and loud trumpeting calls. These birds need large areas of forests, wetlands and barren land for feeding, roosting as well as for breeding. However, with increasing developmental activities around the world, forests are continuously being cleared and wetlands drained out.

Thousands of miles are covered each year during the migration. Some species even cover more than a dozen countries. Therefore it is important to know and understand even the temporary habitats used for stopovers and staging for necessary conservation of these habitats.

Trans- boundary Migratory study with radio and color tagging of these birds is one method of finding out the exact locations of habitats used by them. Additionally the method can also show the route and time taken during the migration. This will result in collaborative conservation of the bird and its habitat among the regional countries.

The captured crane is immediately ringed, measured and radio tagged

One such program is being carried out by the Crane Conservation Germany (Kranichschutz Deutschland) each year since its establishment in the early nineties. I was fortunate to have been invited to participate for the 2011 crane banding program in Germany from 14 June 02 July 2011 with the support of the International Crane Foundation and the Crane Conservation Germany. Two French and a Spanish were also invited to join the operation.

Three study areas were chosen namely, Karow, Diepholzer Moorniederung and Nordvorpommern. All the spotted nests and sites are recorded prior to the operation and searched accordingly for the family. The information is recorded by local volunteers and Crane Conservation Germany team every breeding season.

The method for capturing the cranes is to start very early in the morning and drive into the vast open meadow and once the cranes are spotted two runners dash towards the young crane and capture it by hand. If the reported family is not spotted on the open meadow the team split and scan around the nests in the forest.       Once the cranes are caught, the team ring, measure, weighs and fit transmitters which take around 10 minutes. The birds are then released and the team leaves the area as quick as possible.

A team of local volunteers then monitor the banded cranes over weeks before they start their autumn migration. Their transmitter’s signal is then searched for by other volunteers stationed at stop over points along the long migration route and all data fed back to the Kranichschutz Deutschland team.

The team captured and ringed 36 young cranes and 1 moulting adult.