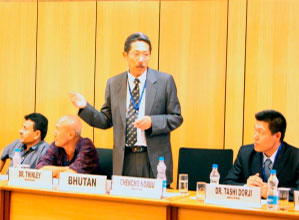 New Delhi, India: Underscoring the urgent need for a strong regional collaboration to ensure food security in the face of climate change, delegates from the four countries of Bangladesh, Bhutan, India, and Nepal said the impact of climate change in the Eastern Himalayas cannot be undermined.

In a two-day expert group meeting held in New Delhi, India, the participants agreed that a clear policy on food security and climate change must be introduced and implemented in the region.

The delegates said that despite the rich biodiversity and diverse traditional communities, the four countries remain extremely vulnerable to the impacts of climate change because of the fragile ecology of the region.

Therefore, the experts agreed that there is an urgent need for the exchange of information and technology among the four countries. They said ensuring food security should continue to remain the top priority of the four governments.

According to the Food and Agriculture Organization of the United Nations, food security exists when all people, at all times, have physical, social and economic access to sufficient, safe and nutritious food which meets their dietary needs and food preferences for an active and healthy life.

The meeting, therefore, is expected to identify the issues of common interests and formulate a regional action plan on food security. The meeting will also look into and suggest institutional mechanisms for implementation of the regional action plan and agree on a set of recommendations to be included in the Climate Summit declaration in November 2011.

The executive secretary of the Climate Summit Secretariat, Tashi Jamtsho, said the meeting will result in a regional framework of action on food security, and will discuss and agree on proposed declaration points.

The leaders of delegation presented papers on the current situation analysis in relation to food security in their respective countries. They noted that there were many common challenges facing the farmers of the four countries that called for common solutions. The delegates discussed food policy environment in the four countries, the existing capacity and knowledge, and technology and research focus. They also identified common points to be included in the regional food road map.

The two-day expert group meeting on “Building Climate Resilience for Food Security and Rural Livelihoods” is part of the build-up to the Climate Summit for a Living Himalayas – Bhutan 2011. It is jointly organized by the environment and forests ministry and the Indian Council of Agricultural Research of the agriculture ministry of the government of India.