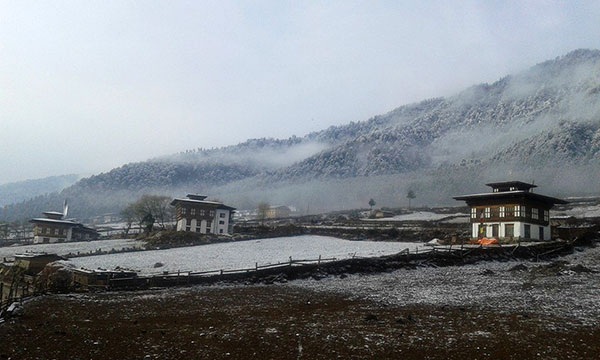 It is spring again and local people in Phobjikha are busy with their farm works. People have waited for the snow for long. They have tilled their fields and started planting potatoes. It is time to get to work.

But it is also a prime time for the Black-necked cranes to leave for their summer habitat in Tibet. It has been five months since they have arrived in the valley. It has been very cold recently with light snow on the night of 1st March.

Cranes started flying on 25th February and an amazing 68 cranes flew that pleasant day. The next day, 30 BNCs took off and on 27th, yet another large number of 200 BNCs took off.  Since then there have been regular flights and today at 0930 hours about eight BNCs took off. The weather is reported to be pleasant with plenty of sunshine and clear skies. As of 3rd March evening less than 30 BNCs were seen in the valley with one injured crane. We hope it will make it to its summer home. Today evening we saw 30 BNCs roosting in the valley.

Before the flight, the BNCs usually make unison calls, take spiral upwards flight and then fly north-west towards the Pelela mountain pass and over the mountains. Last year the BNCs left the valley starting 9th February consisting of ten adults. Cranes started to fly on various dates in groups of two to 50. Last winter (2013-2014) saw about 422 Black-necked Cranes including 42 juveniles in Phobjikha which is the highest number of cranes to be recorded since 1986.

The local people considers the departure of the cranes as a sad moment since they won’t be seeing and hearing the birds until October. For them the cranes making spirals and circumambulating the Gangteng Monastery in the air before they fly towards north-west is indeed a precious and sad moment.

This year Phobjikha received 396 BNCs with 40 Juvenile. Over all Bhutan received a total of 544 BNCs with 75 juveniles. Bumthang saw an increased number of BNCs with a total count of 28 birds, Khotokha received only six birds, Kurtoe in Lhuntse received seven birds and Bumdeling received 107 BNCs with 12 juveniles.

RSPN would like to thank our stakeholders and friends in Department of Forest and Park Services (Bumdeling, Bumthang, Lhuntse and Khotokha) and volunteers across the habitat areas for their keen participation in the annual counts. Tashi delek!