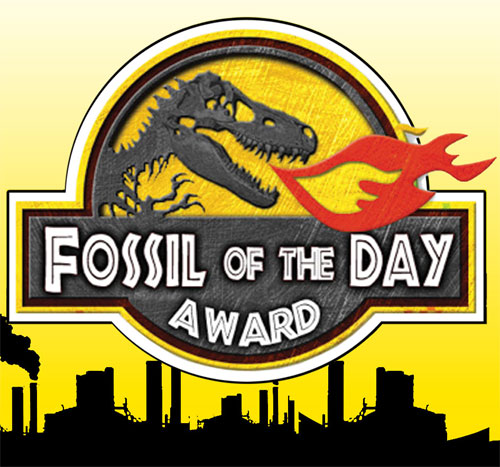 Climate Action Network’s 700+ member organisations regularly judge ‘Fossil of The Day’ awards, giving them to countries who have performed badly in the climate change negotiations. When earned, these slightly sarcastic yet highly prestigious awards are presented daily during climate talks. The Fossil of the Day awards were first presented at the climate talks in 1999 in Bonn, initiated by the German NGO Forum.

Durban, South Africa – Poland has not won a Fossil of the Day by itself since 2008, when it hosted the United Nations climate change negotiations in its city of Poznań. All that changed today, when it took First Place for putting coal ahead of climate. Canada, which has won plenty of Fossils since 2008 (and plenty since the start of this week), won another, coming in Second Place with another insult by its Environment Minister to developing countries.

The Fossils as presented read:

“Canada wins the 2nd place Fossil for failing to understand the fundamental principal of common but differentiated responsibility.

A memo for Canada:

Once upon a time, countries agreed by consensus on a little thing known as ‘Common But Differentiated Responsibilities’ – this became a central pillar in global climate negotiations, recognizing that those who did the most to cause this problem should act first and fastest to clean up the mess they made. It seems that Canada’s Environment Minister missed the briefing on this fundamental principle of global climate talks. The minister has made a series of blunders over recent days, garnering Canada 3 Fossil of the Day awards so far. This most recent blunder is particularly insulting to the majority of the world who, in addition to living in poverty, are also dealing with the worst impacts of climate change right now. Minister Kent rejects the idea of ‘guilt payment’ to poorer countries for emissions. He said, ‘there is a fairly widely held perception in the developing world of the need for guilt payment to be built into any international deal on climate’ (It’s a view Ottawa does not share).

We suspect this will not be a popular opinion here at an African COP – perhaps Minister Kent should prepare himself for the political storms that will await him here in Durban.”

“Poland wins the 1st place Fossil. Is it a Polish Presidency or a Coal-ish Presidency of the EU at this COP!? CAN is amazed by recent actions of the Polish EU Presidency which endangers the credibility of the EU at these negotiations. While EU diplomats are trying to find solutions for the climate crisis in Durban, the Polish Presidency has decided to support ‘the European Coal Days’ by using its Presidency logo. Promoting the dirtiest of fossil fuels at the very same time as the crucial talks in Durban are getting underway seems to be a joke both for EU diplomacy as well as the global effort to stay below 2 degrees
The Polish Presidency seems to be talking out of both sides of its collective mouth. On one hand, it decides to support a private interest lobby for the most polluting of all fossil fuels, while on the other, it is talking
big about finding a global solution to climate change. As one Member of European Parliament in Durban said, ‘It’s not helping the EU’s efforts in Durban. The presidency should be playing an important role but instead, this is absolutely weakening the EU’s position in Durban, and the Polish presidency is to blame.’ Roughly half of global emissions come from coal! Poland – or is it Coal-land – seems keen to see this
reliance on coal to continue to grow rather than make the urgently needed move to renewable, non-polluting energy sources. We urge the Polish Presidency to abandon coal and, in support of the rest of the EU working hard in Durban, embrace a clean, green 100% renewable energy future.”

Durban, South Africa – Canada again earned the first place Fossil of the Day on Tuesday for a complete mismatch between what it knows the world needs, and what it is willing to do. Meanwhile, the United States  took its first Fossil here for nearly as outrageous of comments, on ways to avoid staying below 2 degrees Celsius of global warming

The Fossils as presented read:

“The United States of America earns the 2nd Place Fossil. It is one thing for certain governments in Durban to be complacent about the urgency of global climate disruption. It is another issue to be complacent when their respective countries are the main culprits, such as the United States who is the worst historical climate polluter. But yesterday the United States position degraded well beyond complacent by rationalizing the collective mitigation targets as in keeping with what climate scientists say is needed to solve the avoid global disaster.

Referring to the fact that he himself was an IPCC contributor, Jonathan Pershing, the US Deputy Special Envoy, said yesterday that ‘there are an infinite number of pathways to staying below 2 degrees.’ And, yet, the US has managed to avoid all of them. Pershing nonetheless argued that current targets are sufficient enough through 2020.

There is scientific consensus about anthropogenic climate disruption, the urgency to have an emissions peak to avoid runaway global warming, as well as the gross inadequacy of pollution targets. The United States is either in denial about the science, or is trying to thwart justified pressure to improve its own ambition.”

Canadian environment Minister, Peter Kent, said yesterday to media that: “There is an urgency to this. We don’t need a binding convention, what we need is action and a mandate to work on an eventual binding convention.”

What can we say. He nailed the first half of the sentence!

The second half needs some work: In order to address an urgent problem, we need a mandate to work on an eventual solution?

Like Canada’s plans to address its GHG emissions – this just doesn’t add up! (Canada has made many empty promises over recent years, and continues to have no plan that comes close to achieving our weak targets.)

Canada has agreed to keeping global warming below 2 degrees in Copenhagen, they have said they understand the need to close the gigatonne gap as soon as possible, and they claim to take the climate crises seriously. *** But action is for everyone else! ***

To quote a panelist at today’s CAN international press conference: “Canada is quickly becoming a bad joke at these negotiations.” So please Canada – we need you to urgently work on an urgent solution to solve an urgent problem.”

Durban, South Africa – The first day of the United Nations climate change negotiations started off badly for Canada. It  earned the First Place Fossil of the Day for failing to support a Second Commitment Period for the Kyoto Protocol, and
abandoning even its current participation in Kyoto. It also took Second Place Fossil for insulting the Least Developed Countries, some of the nations that will suffer most from Canada and other industrialized countries’ greenhouse gas pollution. Rounding out the awards, the United Kingdom received Third Place for helping to move tar sands oil into Europe.

The Fossils as presented read:
“The 3rd place fossil of the day is awarded to the UK, following revelations that UK Ministers have done a deal with the Canadian government to support the entry of tar sands into the European fuel supply chain, undermining proposed provisions of the European Fuel Quality Directive. The UK does not appear as frequently as Canada on the fossil roll-call, but when they do, they do it in style. Despite claiming to be the ‘Greenest Government Ever’, the ruling coalition in the UK has become champion for the world’s dirtiest fuels. The UK might have a different opinion from Canada on the value of the Kyoto Protocol (we hope so), but there is one thing they can agree on – a Government’s best friend is its oil lobby.”

“The 2nd place fossil of the day is awarded to Canada following statements by their environment minister that they are coming to Durban to “play hardball” with developing countries. This quotation from Canadian Environment Minister Peter Kent, doesn’t even require paraphrasing in typical fossil humour – it is sufficiently outrageous on its own: ‘Emerging and developing countries need to stop “wielding the historical guilty card” and asking for a free pass on emissions reductions just because in the past, industrialized countries had more emissions than the rest of the world’. Hands off, LDCs; that “free pass” on emissions reductions belongs to Canada!”

“The 1st place Fossil also goes to Canada. Although Canadian environment Minister said he hoped to win less fossils then his predecessors, he is not off to a very good start! Canada has proven its fossil track record with 4 consecutive fossil of the year awards, but if you can believe it, it seems they are even worse than we thought! Environment Minister Peter Kent has articulated clearly that they will not budge with international pressure on a second commitment period of Kyoto (a great attitude to have in negotiations). This is unfortunately not necessarily a surprise, Canada has been ‘separated’ from its Kyoto targets for years, but it seems they are headed for divorce.

In fact, reports are saying that on Canada’s side it is already a done deal, and yet hear they are, planning to spend two weeks negotiating a treaty they intend to soon abandon. This is a tough one for fossil because it is hard to joke about. Canada is here in Durban in bad faith. Countries should be asking themselves why Canada is sitting at the Kyoto negotiating table with a secret plan to formally withdraw from the protocol mere weeks after the talks end.