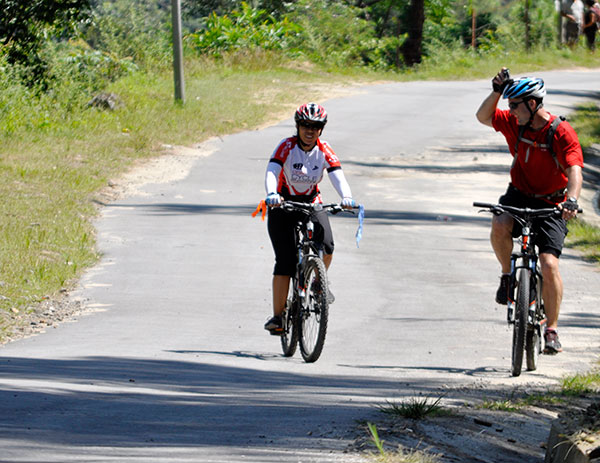 On launching the Jigme Khesar Environmental Research Fund (JKERF) in August 2013 by Her Majesty Gyaltsuen Jetsun Pema Wangchuck, Queen of Bhutan, the Royal Society for Protection of Nature initiated the first research fundraising of its kind with support from friends of RSPN from National University of Singapore.

Dr. Edward Webb, Dr. David Bickford, Ms. Mary Rose Posa, and Ms. Rachel Conejos Webb were the first group of individual donors from Singapore National University who has helped in building the research fund. The group visited Bhutan from 20-28 September 2013 and generously contributed US$ 10,000 to the JKERF, which will be judiciously used to support immediate research proposals received from the emerging research students within Bhutan. The group also interacted and discussed on various future approaches to build the research initiative with the RSPN team.

During the weeklong visit to Bhutan, the group visited Thimphu, Paro and Punakha district. The trip included mountain biking, hiking along the ancient national trade route and Tigers nest and visit to cultural sites including Dzongs and temples. The highlight of the trip was the wedding ceremony of David Bickford with Mary Rose Posa in Chhimi Lhakhang (The Divine Madman’s Temple in Punakha) following typical Bhutanese culture.

More of such fundraising activities will be carried out to raise more funds for the JKERF reserve in future.