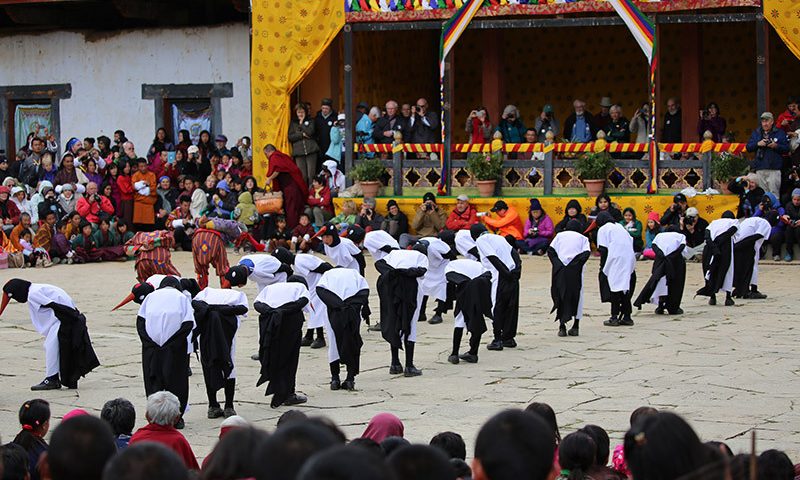 During the winter months, the Black-necked Cranes become part of the local people’s daily lives. The festival is an occasion for the locals to rejoice and celebrate the arrival of Black-necked Cranes, revered as the heavenly birds. The festival is organized to generate awareness, provide economic incentives for local communities and form an avenue for the locals to renew their commitment to conserve the cranes. It also offers communities an opportunity to showcase their cultural heritage and skills. The festival generally includes cultural programs such as folk songs, environment related songs and mask dances performed by the local people, school children and monks. The highlight of the festival is usually the locally choreographed crane dance performed by school children. The festival was initiated by Royal Society for Protection of Nature, a national NGO, as a part of Integrated Conservation and Development Program (ICDP). The first festival was held in November 1998 in the middle of the valley near the old school. RSPN received the guidance of International Crane Foundation, USA in the initial years.

In 2004 the festival was not held due to constraints in resources. From 2005 (7th Festival) onwards, the festival venue was shifted to Gangtey Gonpa and since then it has been celebrated in the majestic courtyard with the blessings of His Eminence Gangteng Trulku Rimpoche. Starting 2013 (15th BNC Festival), the organizers decided to collect entry fees from the tourists for the sustenance and improvement of the festival. An entrance fee of Nu. 500 (equivalent USD 8) was collected from each tourist which was then used to cover the festival cost and the remaining was reserved for the following year’s expenses. The festival is an excellent platform to create an awareness of Black-necked Cranes to local, national and international participants. In the 2014 festival, close to 250 tourists came to the festival. The 17th Annual Black-necked Crane festival (11-November-2015) was a very special festival which saw the launch of Black-necked Crane Bhutanese stamps and children’s book “Crane Boy” authored by Diana Cohn and illustrated by Youme Nguyen Ly. The children’s books were graciously distributed to local schools and institutions by the author and the illustrator.  It was also very special because it saw the convergence of three significant leaders associated with crane conservation in the valley; The Gangteng Trulku Rimpoche, Dr. George Archibald (Co-founder, International Crane Foundation), Dr. Kinley Tenzin, Executive Director, Royal Society for Protection of Nature.

The festival has now become part of the local culture in Phobjikha valley and attracts local and international tourists alike. The locals are the true conservation champions and all are winners: tourists, visitors, organizers, participants and the performers.

Acknowledgement: RSPN thanks all the past and current supporters and hopes to make Annual Black-necked Crane Festival a model community-based event. RSPN’s officials and GPEMC members have selflessly contributed in the festival what it is today. Thank you all. 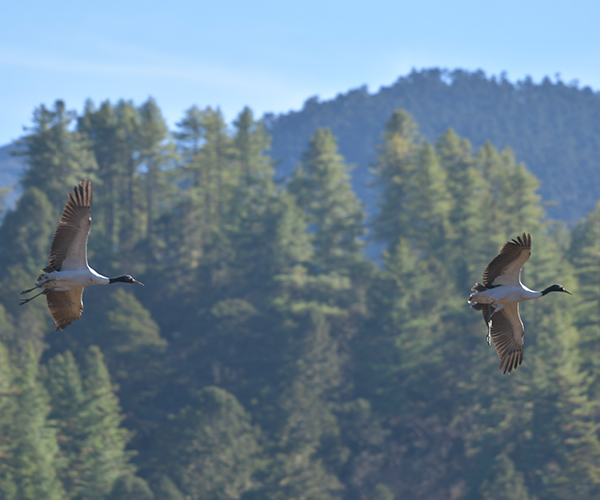 I hope to see Thrung Thrung Karmo next winter also.