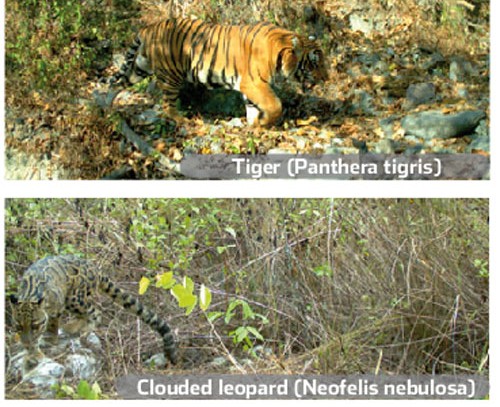 Ugyen Wangchuck Institute of Conservation and Environment (UWICE) researcher, Tshering Tempa, said he chose the park to conduct the study in partnership with RMNP, University of Montana, Bhutan Foundation because of high tiger density and the park being productive compared with others.

“Each camera costs about USD 500 and for logistics it cost about Nu 500,000,” he said. Bhutan foundation funded all camera traps along with USD 2,000 to cover logistics costs.

Camera traps were first set up in November 2010 with batteries and memory checked twice every month.

Through 2,036 trap nights, of the six species of wild felids, leopard was the most common animal to be captured in almost all camera stations, while the Asiatic golden cat was the least common.

Camera traps were left for 60 days and trap nights were calculated based on camera stations.

“We set up two camera traps at each station so that we could not only capture the animal from both angles but also to check its stripes to differentiate one from the other,” Tempa said.

He said around 20 camera traps were damaged by elephants and 10 burned in forest fire.

“But luckily we could retrieve the data from the camera traps,” he said.  “The main challenge was the remoteness to set up the camera traps and requiring many field staff, especially with the park located along the borders.”

The next step, its officials said would be to cover larger grounds of about 3,000 sqkm including the royal Manas park and Jigme Singye Wangchuck National Park. Though the study was not designed for estimating abundance, they detected 10 individual tigers, 20 individual common leopards and seven individual clouded leopards.

“We may not have detected the fishing cat because we did not place camera trap near their typical riverine habitat,” Tempa said. “If the objective of conservation is to save the greatest number of species from extinction, then focusing conservation efforts and resources in areas such as Manas will be most effective in meeting conservation objectives.”