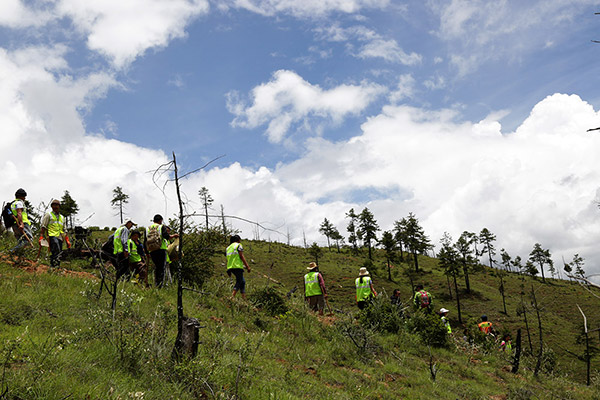 Despite stern legislation and public awareness program in place to curb forest fires, it is one of the major environmental problems in Bhutan causing immense threat to the rich biodiversity.

Forest fires in Bhutan have caused huge damages to biodiversity resulting in environmental degradation. In response to substantial deforestation over many years due to forest fires, an approach to sustainable forest management through reforestation activities are being implemented by the Royal Society for Protection of Nature (RSPN).

So far, about 140 RSPN members volunteered for the plantation of 15000 trees the fire burnt area measuring 22.758 acres in Kuenselphodrang. The species consists of Quercus grifitthii, Quercus semicarpifolio, Pinus wallichiana, Benthamedia capitata, Acer pectinatum, Rhododendron arboreum, Prunus persica, Yushania microphylla and Rhus chinensis which are of local native species. The plantation is expected to complete by end of July 2014.