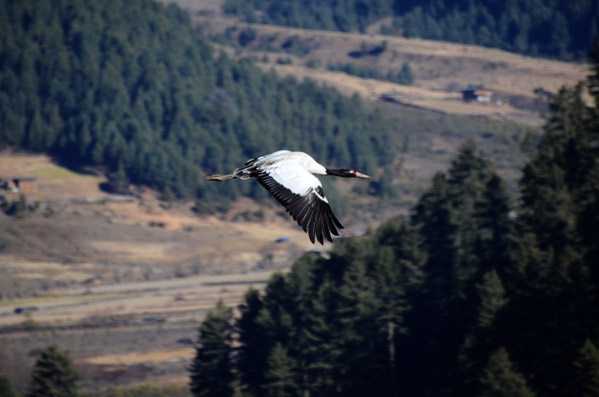 With the completion of winter migration, the total number of Black –necked Cranes sighted in the country across all the habitats are monitored as usual and recorded by conducting a simultaneous count coordinated by the Royal Society for Protection of Nature. The count helps in understanding the population trend of the cranes. The count is normally carried out when the cranes are in their roosts.

For this season the annual count was conducted on 17th January 2014 at 0600 Hrs. The date was fixed in close consultation with all the stakeholders, i.e. the Forest Beat Office and Gangtey Aman Kora resort in Phobjikha; Khotokha Range Office; Wangchuck Centennial Park and Ugyen Wangchuck Institute for Conservation and Environment in Bumthang and Bomdiling Range Office and Bomdiling Wildlife Sanctuary in Trashi Yangtse.

In Phobjikha, since there were several roosting areas, three teams were formed for the count. Aman Kora staff led by the Lodge host, Mr. Jigme, conducted the count at Aman roost; Mr. Rinchen from Jigme Singye Wangchuck National Park and I conducted the count for the four main roosting areas opposite to the Black-necked Crane Information Centre and Mr. Dampai from Beat Office did the count for the roost near the old Phobjikha Middle Secondary school.

For obtaining accurate number, three counting methods were used. The first being direct count using spotting scopes in all the roosts. This method required repeated counting of the cranes for at least four times. The total number of these four counts is averaged to give the final number. The second method used was through photography. Cranes in their different roosts were photographed and counted in a computer monitor. The final counting method was counting the departures from the roost. This method was very reliable, however requires a lot of time.

For Phobjikha, using these three counting methods, the following count was obtained:

For rest of the habitats in Bhutan, using the direct count method, the following result was obtained: