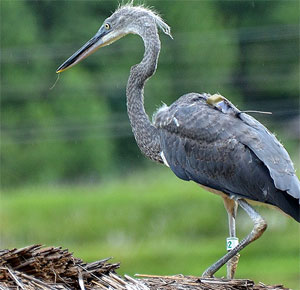 Mr. Jigme Dorji’s research on the WBH “Protecting White-Bellied Heron Habitat: Extent of anthropogenic threats and people’s attitude towards their conservation in Bhutan” was conducted for Punatsangchu and Mangdechu basins.  His study concludes that the birds are sighted between the altitudinal ranges of 600-1294 masl during monsoon season and that matured chirpine forests were  preferred for nesting. According to his habitat suitability model (GIS model), it is projected that about 347.95 km2 is available as suitable habitat for the WBH, accounting for 0.9 percent of the total geographical area. Based on this model, the study suggests that Kurichu and Mangdechu basins could support some WBH population.

Punatsangchu basin was projected to have more significant threats than Mangdechu basin possibly due to the fact that the former basin has a higher population density, closer proximity to agricultural land and the construction of hydropower plants. Riverbed quarry and livestock grazing were listed as two major causes for current habitat degradation. The study also suggests that the local people view this bird as a rare and endangered water bird but without much social or cultural value. However, people are very supportive of the conservation of the bird.

The study made several recommendations; the two most important being: (1) a reassessment of country-wide WBH habitat based on the projected habitat model and confirmation of WBH population in Kurichu and Drangmechu river basins and (2) the Government’s follow up on the listing of WBH under the Schedule 1 of the Forest and Nature Conservation Act of Bhutan (1995).

Mr. Jigme’s field work was sponsored by RSPN, with modest financial support. He is from one of the first batches of in-service civil servants who recently graduated from the College of Natural Resources, Royal University of Bhutan. We wish Mr. Jigme  the best of luck with his career. (The abstract of his research is available here). RSPN will shortly upload the entire research on our website.