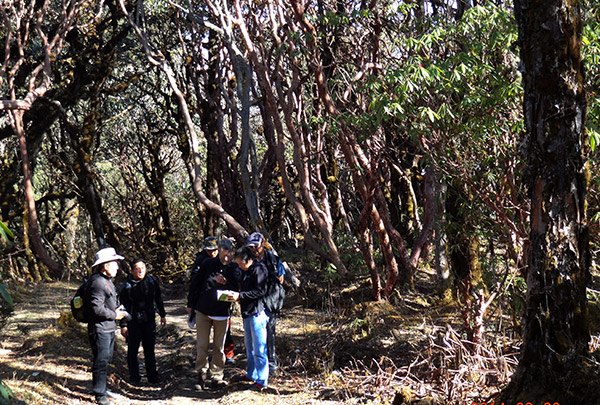 While the world observed the Earth Hour on 29th March 2014, several RSPN members trekked the Lungchutse Hiking Trail (3.5 Kms) which is about 2 hours travel time (one way). The highest point on the trail was about 3569 meters above sea level. The team trekked from Dochula Pass, climbed towards the Lungchutse Lhakhang (highest point on the trail) and then descended towards Yusipang via the Tashigang Gonpa covering 9.2 kms.

The trail mostly passed through conifer forest with rhododendron, juniper, hemlock, birch etc. The rhododendron has not yet bloomed but some primula were bright and in full blossom.  We saw only several bird species such as spotted nut cracker, white collared black bird, Eurasian tree sparrow, green back tit, etc. On the trail the members collected littered wastes such as sweet wrappers, plastics, PETT and glass bottles.

The trekking program was part of RSPN membership program. RSPN plans to organize such rewarding activities more frequently in future to explore Nature in all its glory.