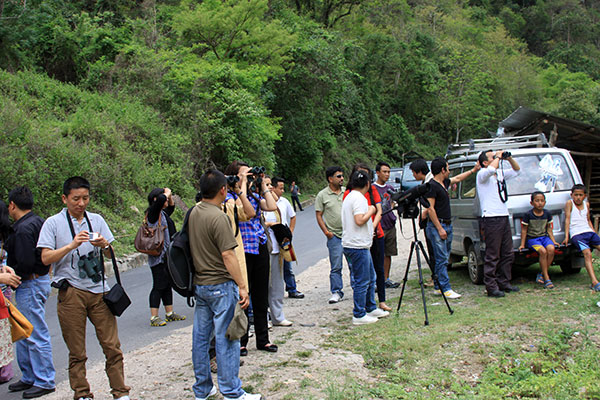 A two-day membership program was organized by the Royal Society for Protection of Nature to mark the International Day of Biodiversity celebrated worldwide on 22nd May. A total of 29 RSPN adult members from diverse backgrounds and professions joined the trip to Samtengang in Wangduephodrang.

Participating members included individuals from government and non-government organizations, private and corporate sectors and youth. On the first day, members travelled to Burichu in Tsirang, in the hopes of seeing a White-bellied Heron (Ardea insignis), who are located across the Punatsangchu River. The White-bellied Heron (WBH), also known as the Imperial Heron, Great White-bellied Heron or Gentle Giant is a species of large heron found in the foothills of the eastern Himalaya (India, northeastern Bangladesh, Burma and Bhutan).  It is dark grey with a white throat and under parts. This heron is mostly solitary and is found on undisturbed riversides in Bhutan especially along the Punatsangchu River.  Because of its rareness, the Guinness Book of Work Records rated the WBH as the rarest heron in the world in 2012. In Bhutan, the WBH is protected by the law.

WBH is listed as Critically Endangeredby the 2012 IUCN Red List. In Bhutan, WBHs are found in riparian habitats below 1700m.. The global population of the WBH is said to have declined and the species is threatened by disturbance and habitat degradation. The Punatsangchu basin in Bhutan is considered as its primary habitat with 20 plus individuals. RSPN has been involved in its habitat and behavioral study for over 10 years. The WBH in Bhutan faces threats from developmental activities especially the hydropower construction. Currently, there are no  plans for habitat rehabilitation and very few  conservation initiatives.  If the economic development activities in the river basin continue in the same pace, the WBH will be threatened with extinction..

The RSPN members saw an adult heron on its nest, assumed to be incubating.  RSPN’s WBH research official Rebecca Pradhan, explained about the particular nest and the WBH’s behavior at the site. Members enjoyed watching WBH through a spotting scope.

By evening, RSPN members reached Samtengang and halted at Samtengsng Middle Secondary School. On the second day, RSPN members were treated to a lecture and demonstration on the preparation of a herbarium with the support of the staff of NRED, who are also RSPN members. Members were shown how to collect plant parts from the wild and prepare herbariums with the help of newspapers and frames. The importance of herbariums in terms of biodiversity conservation and preservation wasdiscussed.

RSPN members were then escorted to see the Samtengang Lake, which has now shrunk in volume and is covered with an invasive species (possibly water lilies). Members were briefed about eutrophication and how a decrease in water levels and the natural addition of nutrients can lead to eutrophication in water bodies. The Samtengang Lake’s case was discussed among the members and also with the school teachers who told the history of the lake. Members explored the lake environment and observed the various species that have invaded the lake ecology.

In the afternoon, on the way back to Thimphu, members also had the chance to visit the Royal Botanical Park at Lamperi. At the park center, members were briefed on the Park and shown a documentary on the White-bellied Heron. . Following the presentations, the RSPN members enjoyed the Park campus; visiting the lake, the rhododendron garden and the children’s park.