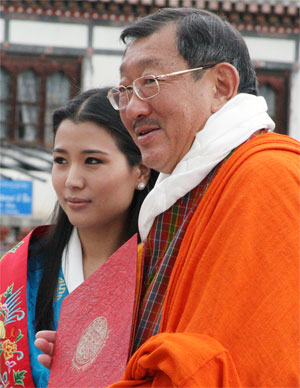 Dasho Paljor J. Dorji, popularly known as Dasho Benji is the founder of Royal Society for Protection of Nature, an only non-profit pioneer environmental organization in Bhutan. The RSPN, which was founded in 1987 now supplements the Royal Government’s efforts in conserving the Bhutan’s flora and fauna diversity outside the protected area system.

The award is established for the first time in Bhutan with the launch of the Bhutan Ecological Society on June 5, 2010 coinciding with the World Environment Day. The Society was launched by Ugyen Wangchuck Institute for Conservation and Environment (UWICE) based in Lamey Gonpa in Bumthang.

It will be conferred every three years for the outstanding leadership and contribution to the conservation of the country’s environmental resources.

Speaking at the award ceremony, Her Royal Highness said although Bhutan had a negative carbon emission, we would still have to bear the consequences for no fault of its own. Coinciding with the event, Her Royal Highness also launched the digital publication of the Bird Songs of Bhutan.

He is currently the special advisor to the National Environment Commission. He has also been appointed as the first founding President of the Bhutan Ecological Society.

Meanwhile, Mr Sonam Phuntsho from Information and Communication Services in Ministry of Agriculture and Forests was awarded the Jigme Singye Wangchuck Outstanding Environmental Stewardship Award for Field Leadership for his unwavering interests and contributions in preserving natural resources of Bhutan. Since early seventies, he has planted more than 10,000 saplings beside from other voluntary services.