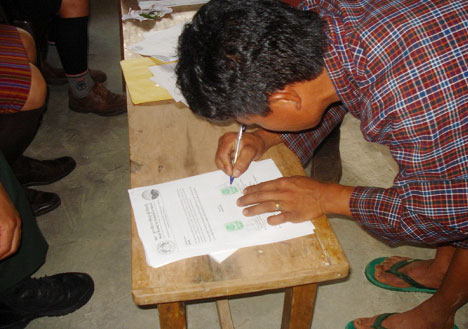 On 7 June 2012, the Royal Society for Protection of Nature handed over Nu. 200,000.00 as a seed money to the Passangphu Human Wildlife Management Group.

Speaking to the group, the Kangpara Gup said that it is timely for RSPN to facilitate with the seed money and must be put in good use considering its sustainability. Human Wildlife Conflict Management Group chairperson Mr. Sonam Chojay also expressed their gratitude to RSPN for the fund support and mentioned that the benefit from the seed money would be to establish locally managed and self sustaining financial mechanism to deal with wildlife damages to crops and livestock at the local level.

Funded by UNDP and DANIDA, the two years project was initiated in early 2011 focusing on compensating the HWC affected farmers by institutionalizing a community-based sustainable financial mechanism at the local level.

The handing over ceremony was attended by Geog Territorial Forest Officer, Principal of Passangphu Primary School, Basic Health Worker of Passangphu BHU, Village Tshogpa and 46 members of the group.