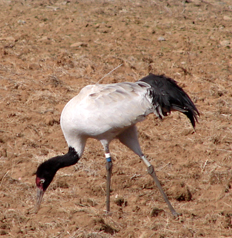 December 8 2009 – The crane named Gangtep returns to Phobjikha from its summer habitat on 13th November 2009. This crane along with its juvenile named Phobjib was captured and attached with coloured leg bands and a Platform Telemetry Transmitter (PTT) on 1st January 2006. The PTT and coloured bands were attached mainly to study the trans-boundary movement of the Black-necked cranes that winters in Bhutan.

Crane Gangtep has been observed returning to Phobjikha ever since the early 2007 winter. During most part of the day the bird is seen feeding in the valley floor and can be easily observed from the Black-Necked Crane Visitor Centre.

For more details on past crane banding refer the article below.