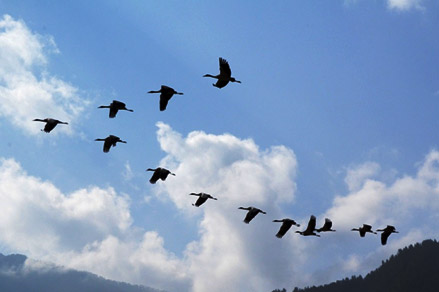 Just as the locals started sowing potatoes for the year, the last group of Black-necked Cranes consisting of two adults and a juvenile, left for their summer breeding grounds yesterday, i.e. 13th March 2014 at 1015 hrs. The BNCs have spent the  past five months  in the cold valley of Phobjikha valley in Wangduephodrang. The first group consisting of 10 adults migrated from the valley on 9th February 2014, following which, groups ranging from 2 to 50 cranes left the valley on various dates.

Observations and records from the past shows minimum changes in the  migratory patterns of the Black-necked Cranes. The winter migration starts from the third week of October till the last week of December and the spring migration starts from the second week of February till the third week of March. Researches (RSPN, Ugyen Wangchuck Institute of Conservation and Environment)  show that the Black-necked Cranes in Phobjikha usually migrate from Lake Bamtsho in Tibet towards North-West of Bhutan.

This winter  (2013-2014) 422 Black-necked Cranes including 42 juveniles wintered in Phobjikha valley which is the highest number of cranes to be recorded since 1986. The Royal Society for Protection of Nature, RSPN, started keeping records since 1986 during which only 120 Black-necked Cranes were sighted in the valley.

According to locals, the departure of the cranes is a sad moment for them and the cranes usually spiral and circumambulate the Gangteg Monsatery in the air before they fly into the horizon towards north-west.