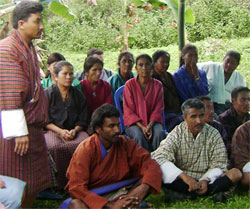 7 June 2010 – Coinciding with the World Environment Day 2010, the Executive Director of RSPN handed over two projects to the beneficiaries under Shonpangka Geog in Sarpang Dzongkhag.

The two projects, Darapakha and Jesi Kholsi water source protection projects were carried out by the Local Conservation Group (LCSG) of Shompangkha Geog after considering the degradation of two sources and the water seeing the water shortage for the communities.

The LCSG members were grateful to the Dzongkhag administration for support and guidance without which the projects would not have been successful.

RSPN is equally indebted to the staff of Sarpang Dzongkhag for their proper management of the LCSG project fund. The lead behind was Mr. Langa, the Dzongkhag Environment Officer. As mandated, Mr. Langa played a catalytic role in issues related to environment and was the motivating factor when it comes to LCSG activities with support from Dasho Dzongda, Dasho Dzongrab and all other staff.

The projects were funded by RSPN as part of building Local Conservation Support Group. RSPN today has LCSG in six Dzongkhags and have plans to institute for remaining 14 Dzongkhag.